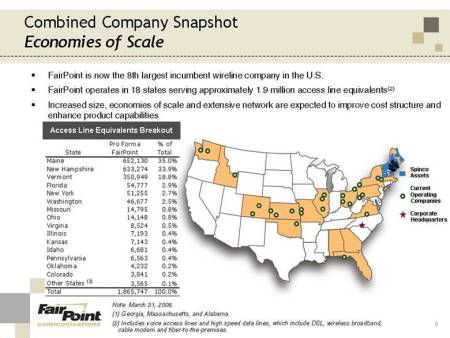 We all knew it was going to happen. Verizon should be held accountable for actions related to bankruptcies of Idearc Media, FairPoint, and Hawaiian Telecom!

PORTLAND, Maine – FairPoint Communications Inc. had its work cut out when it grew sixfold overnight by buying Verizon Communications’ land line and Internet operations in three New England states. But the nation’s credit crisis and a bungled technology transfer made the task virtually impossible.

With a battered financial sheet and a tattered reputation, FairPoint filed for Chapter 11 bankruptcy protection on Monday, barely 18 months after becoming the dominant telecommunications company in Maine, New Hampshire and Vermont.

The bankruptcy filing was widely anticipated and fulfilled critics’ predictions that FairPoint was taking on more than it could handle when it bought the Verizon properties for $2.3 billion.

But nobody’s taking satisfaction in saying, “I told you so.”

“What good does it do us? We can say it, but we’re left here to do deal with it,” said Pete McLaughlin of the International Brotherhood of Electrical Workers, which represents FairPoint employees.

FairPoint, based in Charlotte, N.C., owns and operates phone companies in 18 states with a total of 1.65 million lines. Its largest holdings are in Maine, New Hampshire and Vermont.

The company voluntarily filed for bankruptcy after agreeing on a deal with key lenders that would lower its debt from $2.7 billion to $1 billion and significantly cut its interest expenses, CEO David Hauser said. The plan is subject to approval by the U.S. Bankruptcy Court in the Southern District of New York.

Hauser said the filing will not affect the company’s day-to-day operations or its efforts to expand its high-speed Internet network in northern New England.

“From a customer point of view, this is a nonevent,” he said.

Monday’s filing prompted the New York Stock Exchange to suspend trading in the company’s stock. The company was notified last month that its stock could be removed from the exchange because the price had fallen below $1 a share for 30 consecutive trading days.

Regulators and politicians said they would look out for the interests of FairPoint’s customers and workers. The regulatory boards in Maine and New Hampshire said they have hired bankruptcy specialists to help during the process. Staff members from the three states’ regulatory boards planned to meet with FairPoint’s management and staff on Monday.

“The creditors seem to be taken care of, but that doesn’t mean the consumers’ interests have been protected,” said Maine Public Advocate Richard Davies, who represents consumers.

Besides negotiating with banks and bondholders to restructure its debt, FairPoint has been asking its nearly 3,000 union employees in the three-state region for concessions in a cost-cutting move.

Union leaders, meanwhile, said FairPoint’s problems were caused by “crushing debt and an organizational chaos,” not by its work force.

Davies said two events are largely to blame for the company’s unraveling.

After the purchase was approved by regulators in Maine, New Hampshire and Vermont, but before the acquisition was completed on April 1, 2008, FairPoint was hobbled by the Wall Street financial crisis, he said. To finance the deal, the company planned to issue bonds paying 8.125 percent but instead had to issue bonds that paid 13.125 percent — causing its interest payments to soar.

When the company switched from Verizon’s computer systems to its own network last winter, it was plagued with customer-service, order-fulfillment and billing problems. Those problems caused costs to go up and its customer base to go down.

“Two factors that are major contributors to this weren’t known to regulators at the time the deal was approved,” he said. “Hindsight is a wonderful thing and if we’d known all these things back then I’m sure there would’ve been a different decision.”

Meredith Hatfield, New Hampshire’s consumer advocate, said the challenge now will be advocating for customers’ interests and getting FairPoint to follow through on its commitments.

“Obviously ratepayers and customers of FairPoint potentially have a lot to lose,” she said.

FairPoint said it has about $46 million of cash on hand. It said it received commitments for a $75 million debtor-in-possession revolving credit facility while in bankruptcy.

Idearc Bankruptcy may not pass muster. Approval unlikely according to sources….

According to the Dow Jones Financial Information Services:

The New York private equity firm said if Idearc can’t settle its differences with creditors and confirm an exit plan at the December hearing, other parties should be allowed to propose alternative strategies for the company.

In its request, Idearc said it is making progress in talks with unsecured creditors. Even if the company, creditors and lenders can’t reach an agreement, it said the dispute is likely to be settled during a November trial of the lawsuit.

In the lawsuit, the unsecured creditors committee said JPMorgan Chase & Co., the agent for the lenders, failed to properly register certain copyrights. They say that means the lenders don’t hold a lien on Idearc’s most valuable assets, the intellectual property needed to print and distribute phone books.

Idearc was spun out of Verizon Communications Inc. in 2006. The company blamed the $9 billion in debt it took on as part of that transaction for its bankruptcy filing.

So, the real assets for Idearc are:

This logo is smaller for a reason.

In my opinion the entire spin-off of the company was a pretty bogus deal by Verizon. It stinks rotten. No offense to the fella who I have never met personally from Pepsi! He seems like a pretty funny guy! I especially love the motorcycle stunts for the national sales meeting in February during the announcement of the bankruptcy filing!

According to the Dallas Business Journal:

Dallas-based Idearc said that under its proposed plan, the company’s total debt will be reduced from about $9 billion to approximately $2.75 billion of secured bank debt, with the remainder of the company’s current bank debt and bonds converted to new equity.

Scott Klein, Idearc’s CEO, said in a statement, “The court’s approval of the disclosure statement and its authorization to begin the process for soliciting approval of our plan, signals the latest step toward emergence from Chapter 11.”

Idearc was created in October 2006 when

Verizon spun off its yellow pages and directories division into the standalone company. It was launched with $9.1 billion in long-term debt at its creation. Idearc and its subsidiaries filed for Chapter 11 bankruptcy protection in March.

The question of the day is: Did Verizon know that Idearc could not afford the debt burden when it spun the company off with 9.1 BILLION in debt??